Yesterday (Friday) started with our usual rooster crowing 6 AM morning wakeup.  Our musicians headed up to a school high in the mountains to play a few songs for the kids.  I stayed back at the mission house preparing for our evening concert that I would preach the gospel at the end of it. We had our first heavy rain on Friday since we’ve arrived and afterwards everything smells so fresh and clean as it washes away much of the dirt and dust that covers much of Haiti.  For lunch we had another fantastic meal of chicken and rice.  Seriously though the food has been wonderful. They usually add a few beans in the rice with some spicy Haitian coleslaw.  And what’s amazing is that they prepare and cook all this wonderful food outside over a charcoal fire.

The concert was supposed to start at 4 PM but didn’t get started until 5:30 and eventually ended around 8 PM.  It was a really fun evening for us and a way looser crowd with many more youth in the crowd – it became almost a youth night instead.  Our musicians played and then a couple of the Haitian youth sang solos and then a small youth choir performed.  After which they took turns coming up to the front microphone and telling Haitian jokes from the oldest adults to some of the youth.  Even though we were clueless in what was being said the hearty laughter from the entire crowd was contagious.  After the joke telling they asked two Haitian pastors along with their wives and myself to come up to the front to play musical chairs, it was hilarious.  Being the underdog in this musical chair competition I soon got the crowd behind me with a Haitian cheer all in unison.  They finally removed all the chairs except one and it came down to me and Pastor Canne’s wife in the finals.  I’ll tell you later who the grand champion was.

After all the singing, laughter, fun and games, I was asked to come and preach God’s living Word. It was a tough act to follow but God in His mercy allowed His Word to go forth in power and purpose.  All present heard a clear gospel saving message.  I preached from Luke 18 about the rich man who asked Jesus, “Good Teacher, what must I do to inherit eternal life?”

Things finally wrapped up around 8 PM and we ate our supper at 9 PM.  And what a treat it was, one of the Haitian pastor’s wives named Mary made us a very tasty meal of Haitian spaghetti, which includes your typical spaghetti noodles along with some fabulous Haitian spices, red and white onions, greens peppers and hotdogs fried in a special Haitian sauce and then cut up in bite size chunks – I didn’t miss the meatballs at all.

Today (Saturday) we got up with our usual Haitian alarm clock (rooster crows) at 6 AM, took a bucket bath, ate a breakfast of eggs, potatoes and the thickest and sweetest HOT cocoa you could imagine, (kinda like a 10W 40 oil) and headed farther up the mountain to another church to sing, pray and preach.  It was another wonderful time of sweet fellowship with a small, poor but caring church.  After that we did our first sight-seeing of the island and took in an old fort that was built during the Haitian revolution in 1804 as they won their freedom from the French.

Tomorrow (Sunday) I’ll be preaching at another church service so please continue to pray.  And before I forget, “Happy Mother’s Day!”

Great news: I’m off the floor, yes you heard me right I’m off the floor.  The two pair of bunk beds are officially completed and so no more spiders, mice, rats, lizards or other creatures running over my hands or body!!  And guess what, it is really easy now for a guy with a bad hip to get out of bed in the morning.

The fruit here has been a real highlight.  We have had fresh picked mangoes, papaya, bananas almost every day and it is some of the freshest, sweetest and yummiest fruit I have ever put across my palate.  And Pastor Canne’s wife, Mary, has kept us stocked with fresh squeezed mango juice, cherry juice and some other kind of juice that we have no clue how to pronounce – tart and thick but not bad if you put enough sugar in it.  They only use raw sugar which they buy from the local street vendors.

Every night when it gets dark and as we lie down to sleep we hear this beautiful bird call right outside our window.  We have no idea what kind of bird it is, but its call is short and sweet, so the group here has decided that we have to give it a name (I’ll tell you later what they decided).  The other day we spent much time looking at a variety of birds from Haiti and listening to their bird calls and songs on the web (when we have electricity and Wi-Fi) and couldn’t find a single bird call that seemed even close.  So last night I asked one of our Haitian brothers to come into our bedroom and listen out our window to this short melodic song.  I asked him, “What kind of a bird is that, that sings at night?”  He simply smiled at us and said, “It’s not a bird, it’s a lizard.”

Making much of Jesus!!! 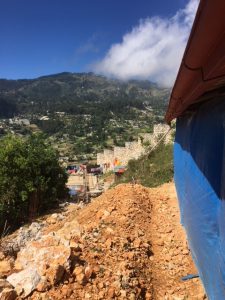 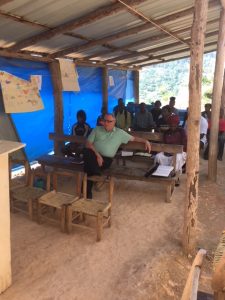 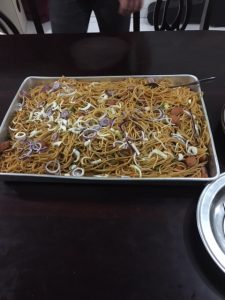 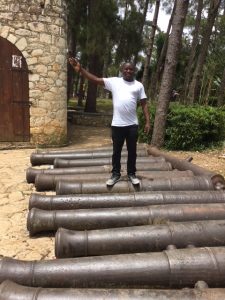 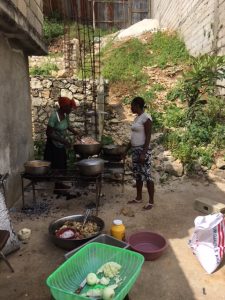 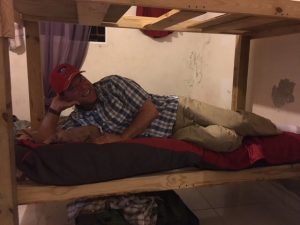